A Review: The Greatest Showman

An entrepreneur starts what we know as the circus, going through ups and downs in mid 19th century America. I loved the soundtrack when I first saw this movie, the story not so much since there were so many characters and not many affecting scenes. Visually it was stunning, not only the sets and incredible costumes, but of course the delectable Wolverine who brings in Zac Efron for a double dose of hotness on a plate.

My favorite scene besides the breathtaking Rewrite the Stars number, was the suspenseful premiere of Jenny Lind. The snobby audience was putting Barnum down who has never actually heard her sing up to this point when he presents her. Then the orchestra starts up and Jenny appears alone on the stage. She sings with a rich lovely voice and Barnum stands starstruck in the wings, his gaping in tears is everything. Jenny receives a standing ovation and the critic resists but finally gets up to applaud. Jenny gives Barnum hopeful looks during and after her performance. Charity sees what’s going on and knows there is trouble ahead. Phillip holds hands with Anne and he drops it when he fears his parents’ scrutiny.
So much goes on in this concert, not to mention the song itself was sweeping and powerful. Like the circus shows, Jenny’s singing is inauthentic in that it is dubbed, fitting with the theme of the movie.

Cue the lights, bring on the choreography, and all those show tunes!

PT Barnum
A tailor’s son who pursues his dreams with a heart to better his family’s situation. Disregarding the cost to himself or others he cons his way to riches. His ideas earn him fame in equal parts adoration and violent hate. He is a study of an oily businessman who takes salesmanship and exploitation to a whole new level but pretty much gets away with everything at the end. It’s ironic how he hates being put down by his father-in-law but rejects his performers mixing in with the fancy after party. Still, it’s hard to dislike him when he has all the nicest selection of top hats and coats this side of the Atlantic.

Charity Barnum
The better half who always accepts and supports her husband in all that he does no matter the circumstances. I really admire her for rolling with a positive attitude (leaning on saint-like) handling manual labor to keep up a household as equally molding into her original upper crust status. The way she stays with him when he goes off only in love with himself, must take a lot out of a person.

Phillip Carlyle
A respectable but miserable playwright who falls in with Barnum as a junior partner, I mean, overcompensated apprentice. He struggles with leaving his station and forbidden love with Anne, a black trapeze artist. His chemistry with Barnum is off the charts!

Jenny Lind
Easily the most fascinating character in the movie, a picture of elegance and grace. She partners with Barnum and brings legitimacy to counter his reputation as a purveyor of immoral, distasteful shows. It’s obvious she wanted Barnum from the start but I have no idea what she hoped to accomplish when he was tied to his family. Even so, I don’t blame her going for Hugh, I mean I totally would.

Magical Moments
– A million dreams from two kids writing long distance letters
– Barnum creating a wishing machine for his daughter’s birthday on the fly
– Recruiting exotic locals for the new museum
– Barnum making good on his promise giving Caroline ballet slippers
– Barnum bringing his family to their new house by zebra drawn carriage
– Barnum and Phillip slinging back shots and dancing together ❤
– Queen Victoria and the oddities from America
– Jenny giving a toast to save the mood of the after party
– Mr. Bennett’s exchanges with Barnum
– Phillip investing in the circus again

Humbug Quotes
– Men suffer more from imagining too little than too much
– Mr Barnum, I can’t just run off and join the circus
– God, I hope she can sing.
– You really are better on the page, Mr. Bennett, hard as it is to believe.
– Comfort, the enemy of progress
– It’s hard to understand wealth and privilege when you’re born into it
– Napoleon didn’t have a 60 piece orchestra
– Mind you, I wouldn’t call it art, but putting people of all kinds on the stage with you, all colors, shapes, sizes, presenting them as equals. Another critic would have called it a celebration of humanity.
– You know Barnum, when I first met you I had an inheritance, acclaim, an invitation to every party in town. And now thanks to you all that’s gone. All that’s left is friendship, love, and work that i adore. You brought joy into my life. (just kiss already!)

Peanut for Thoughts
– For some reason I love Mr. Bennett, the theater critic.
– I don’t acknowledge Zendaya as an actress (snap, I said it). She can definitely dance and wows me with her singing voice but seriously, I can do a better job at emoting. Why people make such a big deal about her overall, I have no clue.
– People who bring up the historical inaccuracy need to be consistent and put down Hamilton
– I could never have the courage to be in a relationship where class and culture differ as much as the one portrayed in this movie
– Love, love, love seeing the business aspect of the circus, the large posters and half pricing for a negative article was brilliance incarnate
– In the beginning, Barnum says the sun can’t stop the show, when circuses typically perform during the day, but the interesting change at the end is they say walls can’t stop them instead when they move to a tent, shapow!
– Read a review wishing the story was about the star-crossed lovers and Barnum as the villain, uh, go watch Water for Elephants, dear

The Greatest Debate: Did PT have feelings for Jenny?
Totally – He was tempted by her beauty and talent. She can relate to him as an illegitimate daughter feeling like an outcast in society. He cared about her because of her sweetness and willingness to partner with him.
Humbug – He only appreciated her amazing skill and ability to boost his credit to the upper crust audience. When she got closer to him, his emotions didn’t waver for an instant. His loyalty to his family surpassed any potential with another woman.

What was Lost
A tragic fact of this movie is how it portrays historical days gone by. The circus will never be what it was, a spectacle of trained animals, most likely abused to perform their tricks. Not to mention the display of “freaks”, I mean in this day and age that kind of thing don’t fly. The political correctness of society took away the classic circus from my childhood, replaced by French acrobats and motorcyclists. 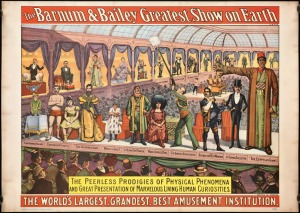 Grand Themes
– The circus is home to the outcasts if you were born this way
– If you have talent and a dream, go for it
– Choose being there for your family over ambition
– Choose saving Zac Efron in a fire over your family
– Break free and come alive if you are feeling trapped in a role
– Don’t put all your money into a proposition with a Swedish nightingale
– Dare to move beyond what roles society puts you in
– Being typical or conventional all the time will be your death, risk it all for freedom!