Rules
Established in 1798, they boast being the oldest restaurant in London and graced by the presence of the likes of Charles Dickens and Laurence Olivier as well as countless other talents.  Known for their wild game, their menu is of traditional fare such as pies and puddings.  Their game includes pheasant, venison, and hare, mentioning they “may contain lead shot”.  Our New Year’s Eve meal was Sunday Roast, with a rib of beef for two accompanied by savoy cabbage, Yorkshire pudding, and dauphinoise potatoes.  The meat was tender and the au jus was heavenly.   A highlight was horseradish sauce they serve on the side which was mild and creamy.  We finished with a white chocolate vanilla brulee.  All in all, it was a nice experience.

Oxo Tower
It’s easy to spot this tall building with blazing red letters.  Going up an elevator we stepped into a sort of loft that overlooked the downtown skyline.  The atmosphere was loud and hip.  I ordered scallops which were sort of tasteless, I much preferred the crispy pork belly my companion ordered.  For dessert we had a traditional Christmas pudding island in vanilla bean sauce.  There was brandy butter on the top and the figgy cake was comforting and delicious. 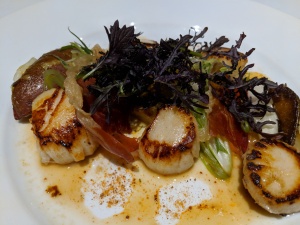 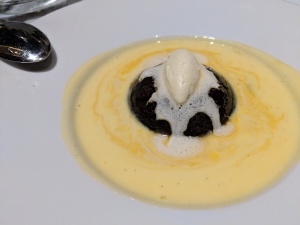 Haozhan
I was pretty excited walking around Chinatown for the first time.  After much prodding and wheedling my friends let me choose a place for dinner.  I looked over menus and decided to go here, and boy, was that the best choice I ever made!  Their menu outside caught my attention with their crispy aromatic duck for two with a fair price.  Crispy aromatic duck is not a common dish I had only read about so I was curious to try it.  The server came with the duck and pulled it apart into pieces with utensils which I didn’t expect.  The duck was smoked and juicy, with a crunchy outer layer.  Their rice pot was adorable, and the rice was seasoned with garlic and onion.  We were seated at a large table in the back and treated very well.  I missed Asian food very much and a little sad to say this was my favorite meal during my trip.  When I get old and gray I will think fondly of this place…

Barbarella’s
Basic good food for the locals, it is a hole in the wall with lots of construction workers.  Their menu consists of sandwiches and the common English breakfast which was simple but good.  I would only add that British love their baked beans and tomatoes. 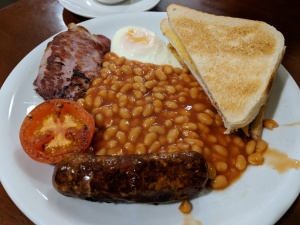 Prezzo
A wedding party rehearsal dinner took place here downstairs where we saw cooks working with a large brick oven.  Their menu had loads of certified gluten free and vegan items, and they are careful about every allergen I could think of.  I split a pasta carbonara which was flavorful and cooked al dente identical to regular pasta.  Their gluten free pizza had a chewy and tasty crust which I devoured with abandon.  With dozens of locations in England, I can only hope and pray they make their way onto my humble continent someday.

Wasabi
Tucked into Waterloo station, we entered a take away restaurant that had individually wrapped packages of sushi.  Legit Japanese chefs worked in the kitchen making their staple curry bowls.  I ordered the chicken curry bowl which was fantastic, made like the Golden Curry of my childhood.

Poppie’s
Of course, what visit to England is complete without giving fish and chips a go?  This famous restaurant is located by Piccadilly Circus and is ranked one of the highest on must try lists for the dish.  Entering a garish 70’s type diner with toys and waiters wearing wigs, it is casual to the max.  We were seated and ordered their fried cod and haddock with chips.  Everything had the Poppie’s brand on it from the sauce to their still water.  I liked the breading, which reminded me of beer batter, and the fish was most and fresh.  I especially loved their tartar sauce but their vinegar was weak.  I’m glad I tried this place, but honestly I don’t think it’s my preferred meal by any means.

Once again, London, you stole my heart and my gluten free stomach.  Let’s eat again sometime!

This entry was posted on Thursday, January 18th, 2018 at 4:04 pm and posted in London Holiday, noms. You can follow any responses to this entry through the RSS 2.0 feed.
« British Sites
A Review: The Greatest Showman »